Whether you’re trying to cut back on your caffeine intake, looking for a new morning ritual, or an afternoon pick-me-up, there are plenty of delicious and healthy alternatives to coffee, each of them uniquely flavorful yet still carrying that close resemblance to your regular cup of Java.

Note: Before getting into some of my favorite coffee alternatives, I must say that there is no such thing as herbal or grain coffee. Strictly speaking, you should only call a drink a coffee if it is made from seeds of the Coffea plant species from which roasted coffee beans originate.

However, for the lack of a better word, I will use this popular misnomer to refer to the following coffee substitutes, so coffee aficionados, please don’t hold it against me.

Check out these best herbal coffee alternatives that taste like coffee!

Historically, dandelion root has played a role in replacing coffee during economic disasters and has the advantage of being a plant that is easy to grow and harvest from the comfort of your backyard if you’d like.

To mimic coffee’s flavor, you need to use roots harvested before the plant sprouts leave, as it yields the least bitter taste. Then you must clean, dry, and roast them.

Once the dandelion root is roasted, it’s time to brew some coffee. Dandelion root coffee is often made like tea; use two tablespoons of dried dandelion root and let it steep or simmer in hot water for at least 5 minutes before drinking.

Because I am using an automatic drip coffee maker, I do like to grind them first in my NutriBullet, but a coffee grinder works great as well. However, if you are using a stovetop coffee maker or french press, then only coarsely grind the roasted roots.

If you’ve missed out on collecting dandelion roots in the early spring, or if you prefer not to get your hands dirty, you can always purchase roasted dandelion—perfectly roasted and ground, ready to use without any additional inconvenience. 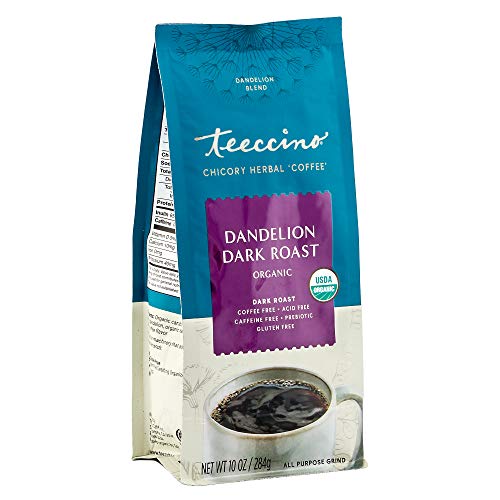 The flavor of dandelion coffee is earthy and rich, not as bitter and slightly more aromatic, but just as delicious.

Ready-made dandelion coffee is usually enriched with other ingredients like roasted ramón seeds, chicory root, and roasted carob. That is not only to give the brew more nutritional benefits but also authentic-like rich coffee notes.

When it comes to nutritional benefits, dandelion root has plenty. Dandelion is rich in antioxidants, particularly beta-carotene. It also abundantly contains magnesium, iron, calcium, and zinc. It is 100% caffeine-free, acid-free, gluten-free, and low in calories.

It is often used for detox and has anti-aging and anti-inflammatory properties.

There are a few potential side effects associated with drinking dandelion coffee. These include upset stomach, flatulence, and diuretic properties.

Additionally, dandelion coffee may interact with certain medications, such as diuretics. Therefore, it is important to speak with a healthcare provider before consuming dandelion coffee, particularly if you have a medical condition or are taking any medication.

But overall, dandelion coffee is a delicious and nutritious beverage that offers a plethora of benefits for the mind and body. It is a great way to start your day or wind down at night as it is naturally caffeine-free and won’t disrupt your sleep quality.

Another trendy coffee alternative with a long history is chicory root. The plant has bright blue flowers, and surprise surprise, it belongs to the dandelion family.

Long used in Europe and a staple in New Orleans, chicory requires minimal care and processing; it is as easy to cultivate as it is to prepare.

Much like dandelion root, chicory root must be roasted beforehand to release the dark, nutty, and slightly woody flavor. The aroma is profound, and the beverage’s dark brown color makes it a nearly identical coffee substitution.

Like dandelion, chicory has zero caffeine. Instead, it is a rich source of inulin, a prebiotic fiber that aids digestion and supports gut health. Chicory has also plenty of other nutrients, such as vitamins B6, C, and E, as well as minerals such as manganese, potassium, and phosphorus.

As for direct health benefits, some studies showcase that it may reduce chronic inflammation and lower blood sugar by affecting carbohydrate metabolism. Also, chicory coffee is Keto and Paleo friendly; just make sure you leave out the sugar. 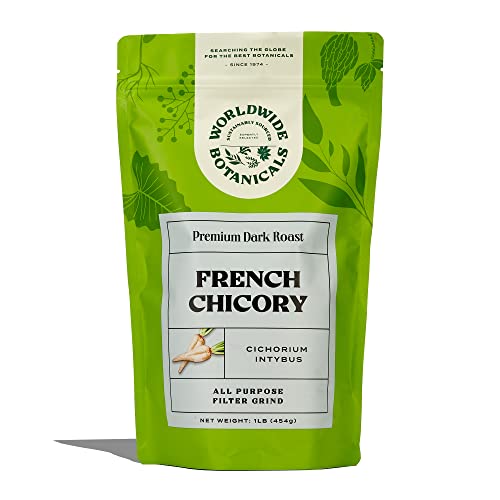 Chicory coffee has a surprisingly very coffee-like taste, typically having a flavor profile that is described as slightly earthy, woody, and nutty. It is often mixed with Carob to complement its flavor.

However, it is essential to mention that some people are allergic to chicory, which may cause pain, swelling, or tingling in your throat. Subsequently, it’s a good idea to proceed with caution if it’s your first time trying this beverage [2].

Also, too much inulin (fiber) may cause flatulence, stomach cramping, constipation, and other digestive distress. So, probably not a good idea if you are on a low-fiber diet.

But overall, chicory coffee has a good deal of benefits, and most people tolerate it well. Its coffee-like taste and the fact that it is caffeine-free are reasons to consider it as a substitute for those who may be sensitive to caffeine or want some extra fiber in their diet.

Those familiar with barley know the grain is similar to wheat, but when roasted, it carries an earthy, nutty base flavor that is quite rich.

The trick to success in making homemade barley coffee is to use whole grain because that is where most of the nut-like flavor concentrates. You can roast the barley at home, but it’s much easier to purchase it pre-roasted and ready to use.

My favorite is powdered or granulated barley coffee, which can be quickly dissolved in hot water or milk. There a quite a few varieties of powdered barley drinks in supermarkets and health food shops.

However, my favorite is the Green Field Organic Instant Barley Drink below, which I could only find online. 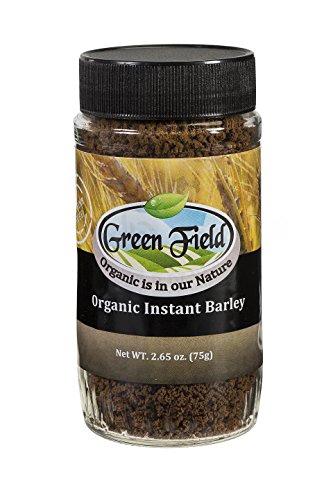 Well-roasted barley coffee tastes almost like regular coffee with an earthy, nutty flavor. It’s not as bitter—just a little lighter on the taste—and can be enhanced with sugar, stevia, or honey if needed.

The benefits of barley coffee are numerous. For one, it is a rich source of antioxidants. Antioxidants are important because they help to protect the body against damage caused by free radicals.

Another benefit of barley coffee is that it is a good source of fiber. Fiber is important for digestive health and can also help to reduce bloating and aid digestion.

Naturally, it is also a caffeine-free alternative to a regular cup of Joe.

However, keep in mind that barley coffee may not be the best option if you want a stimulant, something that will get you going in the morning. The beverage is rich in melatonin, a hormone known to promote and assist sleep [3]. But what a great option for an evening drink.

There are a few potential side effects associated with this drink. These include stomach upset, bloating, and gas. This could be because barley drink is not gluten-free like the other coffee alternatives above.

While these side effects are generally rare, mild, and temporary, it’s important to be aware of them before consuming barley coffee.

One of the most popular coffee alternatives nowadays is Inka, a Polish drink made from a roasted combination of some of the grains and herbs mentioned beforehand.

Released in 1971 in Poland, it skyrocketed in popularity as a coffee substitute during a shortage but remained a staple within the country. 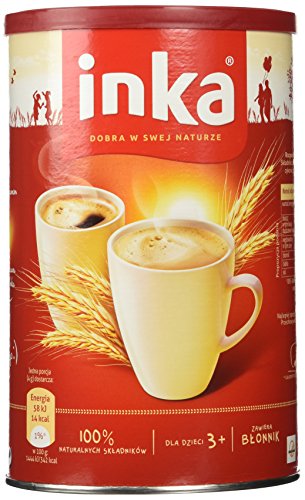 It combines rye, barley, sugar beet, and chicory—all herbs roasted and ground to perfection and without any artificial add-ons. It is also naturally caffeine free making it an ideal drink for the entire family.

Inka recently broke into the international market and has enjoyed a resurgence as a 100% caffeine-free coffee substitute. The original version remains the most popular, but various different flavors are available.

Inka is made with natural ingredients, and a simple composition without added sugar or other sweeteners makes it a perfect alternative to an instant coffee with an almost indistinguishable taste.

Because it is made of rye, barley, and chicory Inka will offer most of the benefits that I mentioned above. But keep in mind that because it contains rye and barley, therefore it is not gluten-free. Although a new Inka Gluten-Free version is available, it does not seem to be available in the US market yet.

One of the popular coffee blends in the market right now is mushroom coffee, and that is for a good reason. Herbal and cereal coffee drinks are also jumping on the bandwagon and are adding mushrooms to the mix.

But what makes Teeccino Mushroom Blend one of my favorite coffee substitutes is the complex flavors integrated into the mixture. Alongside turkey tail mushroom extract, you will also find chicory root, dandelion root, astragalus root, adaptogenic herbs, roasted barley, carob, dates, and figs, all of them organic.

The resulting combinations grant Teeccino a distinctively robust and layered coffee-like flavor that is nearly indistinguishable from the real thing and has a hint of toasted maple flavor.

To many coffeeholic’s delights, it can be prepared with regular brewing methods like French press, Espresso machine, and drip coffee maker. 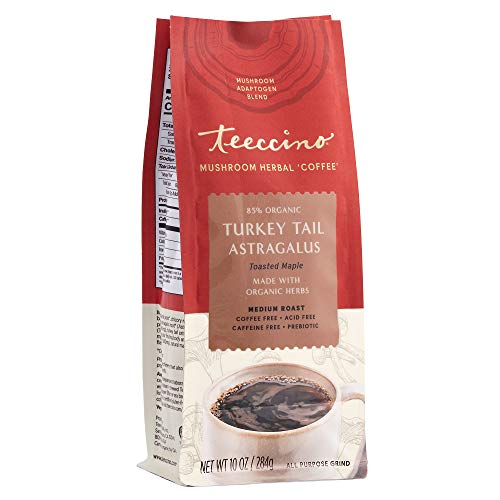 Teeccino’s official website claims the beverage helps boost energy thanks to the 65mg of potassium you drink in each cup. In addition, Teeccino could aid digestion, stabilizes blood sugar, and strengthens the immune system.

Although well-toled by most people, some potential yet rare side effects could be associated with turkey tail mushrooms, these can include upset stomach, diarrhea, and headaches.

Although the drink is caffeine free, it is not gluten-free.

But overall, Teeccino is an enjoyable beverage that is safe to consume and could have quite a lot of benefits.

At the core, most of the beverages in this list feature a combination of three ingredients—dandelion root, chicory root, and barley. Subsequently, you can make your own drink at home with the ingredients suited to your tastes or try out some of the ready-made blends listed above.

However, the options don’t end there. Other ingredients often used include dried fruits, chickpeas, nuts, almonds, acorns, and roasted vegetables. Here are some great homemade roasted grain coffee recipes you can try out.

Also, if you don’t feel like making your own, there are many other brands such as Pero, Dandy Blend, and Lattea— they are all quite mug-nificent and one of these options is bound to hit the spot!