If you’re the proud owner of a NutriBullet, you know how reliable this blender can be. Still, unfortunately, even with the best of appliances, they can sometimes malfunction and break down.

It’s one of the most frustrating experiences – when you go to use your beloved NutriBullet, and it simply won’t work. But what could be causing this malfunction?

In this article, we’ll explore eight common reasons why your NutriBullet might have stopped working. From clogged blades to an overworked motor, these are all problems that can easily be fixed in no time at all.

Why My NutriBullet Stopped Working—and what you can do to fix it.

1. To Blend, Make Sure The Cup I Locked In 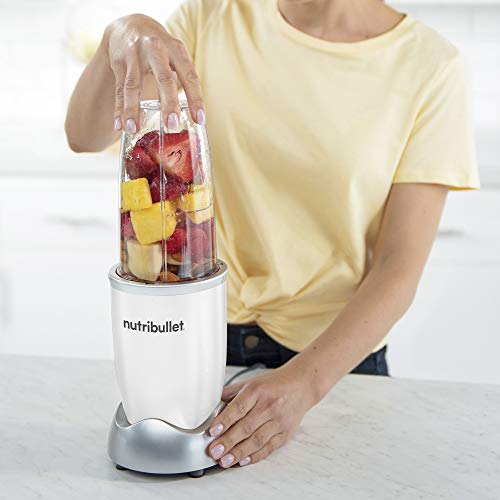 Tap On The Image To Learn More

If you are using your NutriBullet for the first time, it may be a bit unclear how to turn it on. Some of the models, like NutriBullet Pro or Magic Bullet, have no buttons or on-and-off switches.

However, to get started, it is quite simple.

If you don’t attach the cup properly to the base, the NutriBullet won’t start blending; that is why it is important to make sure the cup is properly locked in.

However, if you have done so but your device is still not working or not working correctly, then check out some other common NutriBullet problems and troubleshooting tips below.

Read Also: I Used My NutriBullet To Grind Coffee Beans (And What I Learned).

If your NutriBullet stops working and there is also a burning smell or even some smoke, the cause of the problem could be due to a number of different factors, such as overloading the blender, extended blending time, or using incorrect wattage for your model.

In some cases, it might even be due to a faulty motor or circuitry within the NutriBullet itself.

All of these can cause the motor inside the NutriBullet to overheat, which can cause a burning smell or even smoke. Most NutriBullet devices have an internal thermal breaker that automatically shuts off the appliance when it overheats.

In most cases, you can fix it by immediately unplugging the blender and letting it cool down. NutriBullet will usually reset once the thermal breaker has cooled down.

Also, if the NutriBullet stopped working because you were blending something very thick and heavy, try adding some liquid or removing some of the content to prevent it from overheating again.

3. There Is A Spill Within The Power Base

Making your morning smoothie can be an easy way to start the day right. But, if your NutriBullet starts leaking, it could quickly turn into a kitchen nightmare. Not only will you have a mess to clean up, but the device can also shut down and stop working altogether.

To prevent this from happening, it’s important to take proper care of your NutriBullet. Make sure all parts are securely fastened before blending, and avoid overfilling the cup or container with liquid ingredients.

Additionally, keep an eye on the rubber seal on the lid and blade assembly for any signs of wear or damage. If you notice any issues with your NutriBullet, replace the damaged parts immediately to avoid leaks and ensure that it continues to blend properly.

If there is a leak or spillage, unplug the NutriBullet immediately. Remove the cup from the base, and with a damp towel or a sponge, wipe up any spillage. Turn the appliance upside done and shale it to remove any excess liquid that may have gotten inside it.

However, do not open the device itself or remove any parts from within the power base; simply let it dry and clean around them, and the NutriBullet should start working again.

4. There Is A Problem With A Power Supply

When a NutriBullet stops working, it can be quite frustrating, but sometimes the problem may not lie within the device itself but with an external power supply.

It is possible for external power sources such as wall outlets or even circuit breakers to malfunction, leading to devices that cease functioning with no fault of their own.

To determine whether this is the case for your NutriBullet, start by checking your wall outlet first and then making sure that the device is plugged in correctly and the wall socket is switched on.

If these appear fine, you should also make sure that there is power in the wall socket or in the kitchen in general. Test your wall sockets with the other device, or try a different outlet in your kitchen.

Activators are little white plastic sensors that link the NutriBullet cup to the powerbase so that the device knows when the cup is attached or whether it is attached properly.

To fix this issue, always make sure that the cup is secured properly. Just try to reattach the cup and see if that fixes the problem; if not, remove the cup, check the activators, and see if you can push them down with your finger.

If debris, sticky liquids, or residue builds up around this area, it can cause friction that prevents the activators from moving freely when you attach the cup.

To remove any blockage and ensure the smooth operation of your device again, apply a small amount of warm water to the activators to loosen any sticky residue.

You can also try applying a few drops of vinegar or WD-40 into the activator’s slot and, after a few minutes, dry pressing it down and see if it has started moving freely. If it does, reattach the cup and resume blending.

Many NutriBullet users, including myself, have experienced their blades becoming stuck and unable to turn.

The most common cause of NutriBullet blades becoming stuck is due to food you are blending and not the blade malfunctioning itself. Nuts, dried fruits, fibrous vegetables, or fruits that have a pit or “stone” at the center can easily jam the blades bringing the blending to a halt.

If that happens, unplug the NutriBullet, remove the cup from the base, and then remove the lid with the extractor blades. Rinse the blades under warm water and remove any food or pits from the fruit so that the blades would start moving freely again.

However, if your NutriBullet is quite old or heavily used, the blades can become stuck because extractor bearings may be seizing due to rust or wear and tear. In this case, you should just get a new replacement extractor lid with new blades.

Check out these best No-Leakage Extractor Replacement Blades for Nutribullet here at Amazon.

If you’re a NutriBullet owner, you know the importance of having the blades as sharp as possible. However, sometimes it doesn’t seem to blend into the right texture.

If the blender is working and the blades are spinning, but it does not cut, purée, or emulsify food properly, then it is most likely that the extractor blades are old and have become dull.

You can carefully touch the blades with your finger to see if they feel sharp; if not, you can purchase new replacement blades or get a new lid with extractor blades.

Also, sometimes the blades won’t cut properly because strings of fibers from ginger or other vegetables can get stuck on the blades, stopping them from emulsifying the food properly.

Although it is more likely to happen if the blades are already dull, cleaning the blades and resuming blending should sometimes fix the problem.

If your NutriBullet has been heavily used or even abused, you may have caused some more serious electrical damage to your appliance.

You see, the NutriBullet is designed to work with pulses of less than a minute each time. If repeatedly used for more than that, you may smell burnt at some point—that increased temperature has already caused severe damage.

If the motor coils reach a temperature above 220°F (105°C), it renders the heat sensor useless over time and prevents proper functioning.

Likewise, prolonged and heavy usage can also burn the carbon brushes responsible for conducting electricity to the motor, and the NutriBullet may stop working.

Suppose you have gone through all the other troubleshooting steps above, and your device is still refusing to turn on and work. In that case, it may be due to some more serious electrical problems that need professional attention, or you just have to get a new NutriBullet.

Read Also: Why Is Nutribullet Better Than A Blender? (Most Compelling Advantages).

How long does a NutriBullet last?

NutriBullet is covered by a 1-year warranty; however, if the appliance is in daily use, the manufacturer suggests replacing the blades about every six months to maintain the best performance.

Can the NutriBullet blade go in the dishwasher?

According to the manufacturer, NutriBullet blades, lids, cups, and lip rings are dishwasher-safe. Rinse them under warm water and place them in the top rack of your dishwasher.

Do I need to unplug NutriBullet when not in use?

It is recommended to unplug and power off the NutriBullet when it is not in use. Also, keep the powerbase unplugged when assembling, cleaning, changing, or replacing the blades and accessories or disassembling.

How do you turn off a NutriBullet?

To stop the NuriBullet blending, twist the cup counterclockwise and detach it from the power base. Alternatively, unplug the appliance from the wall socket.

Does NutriBullet have an ON-OFF switch?

Depending on the specific NutriBullet model, some are equipped with an integrated power switch, while other models, like NutriBullet Pro, Baby, RX, Magic Bullet, 1200 Series, 1000 Series, 900 Series,  and 600 Series NutriBullets may be activated by simply plugging the appliance into the power source and attaching the blender cup.

The NutriBullet is a great and sturdy kitchen appliance for making delicious and nutritious weight-loss smoothies, and protein shakes, but it can, unfortunately, stop working or malfunction.

Some common reasons for this issue are clogged blades, burnt-out motor, and overfilled or not properly attached cup.

To prevent the NutriBullet from malfunctioning, always maintain and clean it regularly, use it according to the manufacturer’s recommendations, and don’t overfill the cup. If necessary, replace any worn or broken parts.