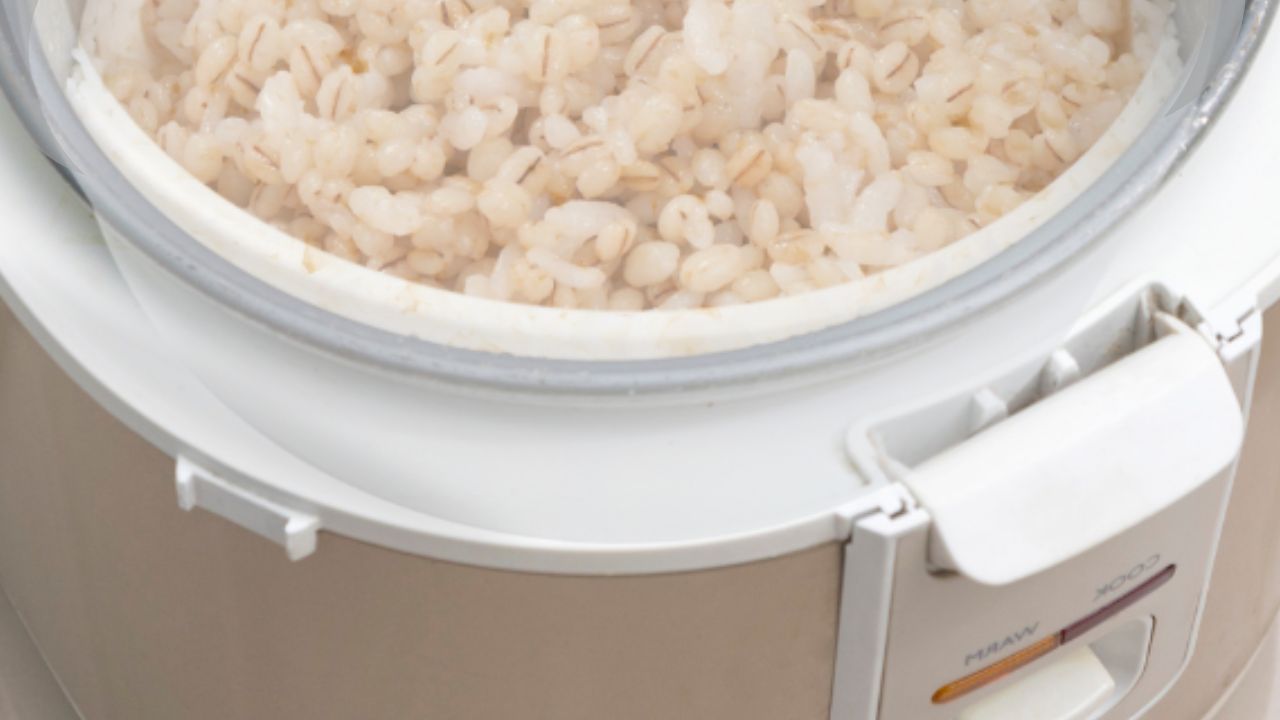 Who knew that a rice cooker could do so much? In addition to cooking rice, did you know that you can cook barley in a rice cooker too?

Here is a step-by-step guide on how to cook barley in a rice cooker. It’s easy to do and yields fluffy and delicious grains. You’ll never go back to cooking it any other way!

Barley has a nutty flavor and is high in fiber with a slightly chewy texture. It is often used in soups and stews, but when cooked well, it can be used as a side for many dishes, the same way you would use rice, couscous, or potatoes; barley can really complement your meal.

But first, before I get into the cooking instructions, it is helpful to know which types of barley you are cooking as they all require slightly different preparation and cooking times.

Jump To Recipe
Contents show
4 Most Popular Varieties Of Barley
1. Pearl Barley
2. Pot Barley
3. Hulled Barley
4. Unhulled Barley
How To Cook Barley In A Rice Cooker – Fluffy and Delicious
Ingredients
Directions
Notes
Frequently Asked Questions
Is barley gluten-free?
How much does barley expand when cooked?
Where do I buy pearl barley?
Which barley is the best for cooking?
How much pearl barley per person?
What is recommended pearl barley water ratio?
How long to cook pearl barley?
What does barley taste like?
How to eat barley?
Do you need to soak pearl barley?
In Summary

4 Most Popular Varieties Of Barley

There are many types of barley available, so the cooking instructions and time might differ based on the type of barley you have chosen. In this post, I will mainly concentrate on two of the most used varieties, pearl and pot barley.

Pearl barley is a type of barley that has been polished to remove the outer hull, bran, and germ layer. It is also sometimes called “pearled” barley. It is readily available in most supermarkets and a popular choice for many dishes, including soups, stews, and casseroles. It can also be cooked in the rice cooker and used as a rice substitute.

Because the husk has been removed, the grain doesn’t need to be soaked before cooking. However, if you have time and willingness, you can still soak it. Soaking grains helps to remove any impurities and also to soften the grain so that it cooks more evenly.

Did you know? Pearl barely got its name because it is polished (pearled) after the husk layers are removed, and it appears cream in color with a pale shine.

Pot barley is very similar to pearl barley, and both of them can be used interchangeably in most recipes. They are impossible to tell apart when uncooked. Once cooked, however, the pot barley will appear slightly darker than pearl barley.

Pot barley has less husk removed, so it is not as refined as pearl. Because it is less refined, it is slightly more nutritious with a more nutty flavor and also has a slightly longer cooking time if not soaked beforehand.

I do recommend soaking it overnight. This is because the soaking process helps to soften the barley, making it easier and faster to cook. Additionally, soaking the barley also helps to remove any impurities that may be present.

Also, keep in mind that if you soak barley overnight, it will absorb some of the water, so you won’t have to add as much water for cooking.

Hulled barley is a type of whole grain with only its inedible outer hull removed. Unlike other types above, hulled barley still has its bran and germ intact, making it whole grain, a more nutrient-dense choice, and darker in color.

Hulled barley contains more fiber, so it has a bit more chewy texture and nutty flavor and can be used in various dishes in place of rice or other grains.

To properly cook hulled barley, it is essential to soak it beforehand, overnight, if possible. This is because soaking helps to soften the grain and makes it easier and faster to cook. Additionally, soaking helps to remove any impurities that may be present on the grain.

Hulled barley can take up to 25 minutes longer to cook than pot or pearl barley and won’t absorb as much liquid.

Once cooked, you will notice that the grains retain their shape and swell up a bit less than pearl or pot parley. This is because hulled barley is a relatively tough grain. This results in each grain being separate and distinct from the others.

Although it is more nutritious than pearl and pot barley, it is not as popular choice among most consumers because of the longer cooking time and more firm and chewy texture.

Did You Know? Hulled barley is a good appetite suppressant. When eaten, the fiber in barley expands in your stomach and is digested slowly, which makes you feel fuller for longer.

Unhulled, or hull-less barley, is actually a different type altogether. It does not undergo any processing, but because the hull is so weakly attached to the kernel, it just falls off during harvesting.

Hull-less barley also requires prolonged soaking; overnight or 24 hours is even recommended. The cooking time is similar to hulled barley, and grains of hull-less barley are also more distinct and chewier once cooked.

How To Cook Barley Using A Rice Cooker – Instructions

How To Cook Barley In A Rice Cooker – Fluffy and Delicious

When cooking any barley in a rice cooker, always use a 3-to-1 ratio of 3 cups of water to 1 cup of barley. The cooking time is about 30 minutes for Pearl and 50 minutes for Hulled barley. Both Hulled and Hull-less barley must be soaked overnight in cold water before cooking. Whichever barley you choose to cook, it is an inexpensive, nutritious, filling, and toothsome addition to adding to meals or eating on its own.

In this section, I have answered some of the most commonly asked questions about cooking barley. If you can’t find your answer be sure to post it in the comments below.

No, barely is not gluten-free. Like rye, wheat, triticale, and spelt, barley is a glutinous grain and unsuitable for individuals with celiac disease or gluten intolerance.

How much does barley expand when cooked?

When barley is cooked, it expands significantly in size. This is due to the absorption of water by the grains, which causes them to swell and increase in volume. The amount of expansion will vary depending on the variety of barley and the cooking method used, but typically, cooked barley will be about twice the size of its uncooked form, which means that one cup of raw barley yields two cups of cooked grains.

Where do I buy pearl barley?

Pearl barley is available in most supermarkets and grocery stores; however, other types of barley, like pot and hulled varieties, are mostly found at health food stores or online.

Which barley is the best for cooking?

There is no definitive answer to this question, as it depends on personal preferences. Some people might prefer a certain type of barley based on its texture and nutritional value, while others might choose a different variety based on its cooking properties. Ultimately, it is up to the individual to decide which barley is the best for cooking, but pearl barley seems to be the most popular choice among consumers.

How much pearl barley per person?

There is no set answer to this question, as the amount of pearl barley per person will vary depending on the individual’s appetite and what else is being served as part of the meal. Generally speaking, however, it is safe to say that anywhere from 1/2 to 1 cup of uncooked pearl barley per person, which yields 1 to 2 cups of cooked barley, should be sufficient.

Whether you use a rice cooker or cooking on the stovetop, it is recommended to use a 3-to-1 ratio of 3 cups of water to 1 cup of pearl barley

How long to cook pearl barley?

To cook pearl barley, you will need to simmer it for about 30-40 minutes. Be sure to check the texture before serving. If the grain is still hard in the middle, you may need to cook it another 5-10 minutes. You will know if the barley is done when it is tender and cooked through. The same cooking time applies if you are using a rice cooker.

How to eat barley?

Do you need to soak pearl barley?

Unlike hulled and hull-less barley, you do not need to soak pearl barley. Pearl barley is a type of dehulled grain that has been polished to remove the bran layer. It’s a quick-cooking grain that doesn’t require soaking. However, it is recommended to rinse pearl barley before cooking.

If you’re looking for a simple and foolproof way to cook barley, look no further than your trusty rice cooker. Barley is a versatile grain that can be used in soups, stews, salads, and even desserts, and cooking it in a rice cooker is as easy as can be.

All you need is a cup of barley, three cups of water, and a pinch of salt. Simply add all the ingredients to the rice cooker, set it to cook, and wait for the delicious results and you’ll have perfectly cooked barley every time.