Mushroom coffee might be the next big trend in superfoods, but is this unique creation that much different from a regular cup of Joe? I recently stumbled upon an alternative to my obsession that claims to be so much healthier than the real stuff. What sold me on this alternative coffee blend was it's proximity to the real thing and all the antioxidants and anti-aging properties and other benefits.

So, let's see if Mushroom Coffee can live up to the hype?

What Is Mushroom Coffee? How Is It Made?

The process of making mushroom coffee involves drying and grounding consumable adaptogenic fungi into a fine powder. This powdered extract is then mixed with regular coffee. Most often used fungi to make mushroom powder include Lion's main, Cordyceps, Chaga and Reishi. These are chosen for their high antioxidant level and well-blending flavor.

What Are The Benefits Of Mushroom Coffee?

Drinking mushroom coffee will not only give you the benefits of the regular Joe, but you will also get all of the great benefits of consumable adaptogenic fungi.

Most notable benefits include:

In this video below, Aaron from Four Sigmatic explains all the benefits of the fungi that are included in their products.

We are regularly exposed to a massive amount of pollution in our daily life. Whether it's from the air or other contaminants, we are routinely exposed to conditions that can cause cellular damage to our bodies over time.

However, mushrooms protect us from this unavoidable damage that has sadly become part of our ordinary lives. Prolonged exposure to some of these free radicals can cause oxidative stress in our bodies. That has been linked to all sorts of degenerative conditions.

Antioxidants are very powerful micronutrients that help clear your body of free radicals.

There are various foods known to be antioxidant-rich. One of the most popular ones that we all know is green tea. It has been said to be packed with antioxidants and anti-aging properties.

If green tea is packed with antioxidants, then, this coffee is absolutely overflowing with this stuff.

However, some mushrooms are more antioxidant-rich than others, but ultimately, they are all packed with the stuff. If I had to recommend some, it would have to be the Chaga and perhaps Reishi.

Chaga and Reishi are one of the most powerful natural antioxidants available. Rich in glutathione, ergothioneine, and adaptogens. These antioxidants help ward off diseases, fight damage by free radicals, and can even have a positive effect on liver function.

Nootropic Edge Of This Coffee

In addition to lowering oxidative stress on your body and brain, some mushrooms like Lion's Mane and Chaga have also been shown to give you a mighty boost of natural nootropics by strongly elevating acetylcholine levels in your body.

Does Mushroom Coffee Have Caffeine? Caffeine found in this coffee is very similar to that of green tea. This can vary, but in general, one cup of mushroom brew contains an average of 40-50 mg of caffeine, which is equivalent to 1/2 cups of regular coffee or one cup of green tea.

Just to give you an interesting comparison, Robusta beans, which contain the most caffeine, have almost four times more caffeine per cup than mushroom coffee.

Having a modest caffeine concentration can be really good for many people because it cushions the prolonged side effects of consuming too much caffeine. You will be less prone to jitters and Insomnia. It also better if you are struggling with restlessness and hyperactivity.

This might be the most alluring of all the advantages of this earthy coffee blend.

Coupled with the right diet, it could be one of the most essential beverages on your menu. Being part of a balanced diet that already promotes weight loss, this brew can help boost your metabolism and is also low in carbs, fat content, and supports glycemic balance.

There are specific properties present in most adaptogenic mushrooms that result in a steady boost of energy consumption with consistent. These properties cause your body to consume more energy and break down fat deposits.

Assuming that you are already on a calorie deficit diet plan and live an active lifestyle, this brew can certainly give you an extra edge and nudge you closer to your weight loss goals.

What Fungi Are Used In The Mix? The Reishi mushroom also named as Lingzhi and Ganoderma Lucidum with a kidney-shaped reddish cap.

There is an assortment of mushrooms that have been packed into this product for it to be so multi-faceted and effective. As mentioned above, the most popular ones are chaga, cordyceps, and reishi.

To pick the most important ones, I have narrow the list down to just a handful that has been used for centuries in traditional Chinese medicine, dating back to 600 A.D.

These are just a handful of mushrooms used in this earthy beverage that many have become to love so much.

Regular vs. Mushroom Coffee - Which One Is Better? 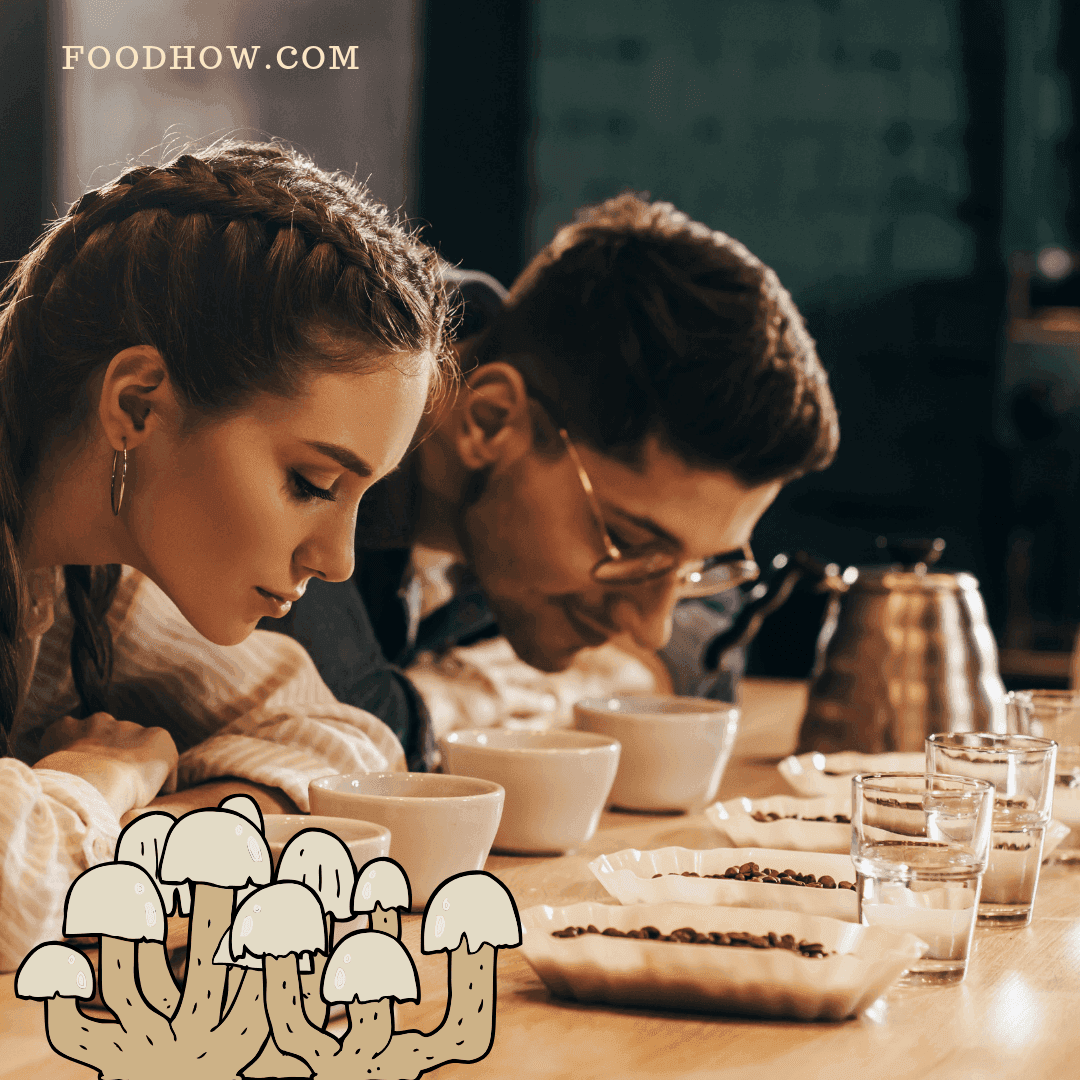 Observing the tastes and aromas of brewed coffee.

I think I have been building up to this particular question for quite some time now. It’s the ultimate question. Which is better: the new mushroom coffee, or the regular old cup of Joe.

Mushroom Coffee is different in a few ways:

I would definitely recommend giving it a try and see how you like it. I personally have swapped my regular cuppa completely for this new mix.

Since I am not a big coffee drinker anyway, I just have one cup in the morning to start my day off right.

However, if you are a big coffee drinker, you don't have to switch completely as I did. Having one or two cups a day is sufficient for extra nutrients and an antioxidant boost for a day. Perhaps right before you need to concentrate during study or work is a great time to drink it.

Which One Tastes Better?

Mushroom coffee could be the answer for those who are looking for a healthy alternative to a regular cup of Joe. But can this earthy tasting brew convert a regular coffee drinker?

Although Mushroom coffee has a clear advantage on the nutrients front, a regular cup of Joe has it beat in the taste department.

Most people don’t mind being very earthy and zen, but when it requires chugging an earthy tasting cup of coffee every day for a month, their devotion to the lifestyle will be no doubt tested.

Regular coffee has been around for quite some time, and the coffee community has really done a number on it. There are hundreds of recipes and thousands of toppings, it’s almost impossible to have a bad cup of coffee.

Mushroom coffee, on the other hand, is more of an acquired taste, and it has minimal taste options. Sure there are innovative and tasty recipes from trusted sources like Four Sigmatic, but most of them require some skill.

You cannot just go to your local coffee shop and order some. It is possible to have something great tasting out from the carton, but there aren't many of these. And even if there are, they don’t taste outstanding. Even with added coconut sugar or stevia added to the mix, you cannot totally get the earthiness out.

Which One Is Cheaper?

It depends on what quality or brand you are looking for. The average coffee producer makes their products reasonably cheap and affordable, whereas the mushroom coffee is slightly above that price or sometimes double that. A double pack, expressos style ground coffee from Café Bustelo, is about $16. In contrast, 30 sachets of Four Sigmatic Coffee mix is about $34.

How To Prepare Mushroom Coffee If you are a black coffee person, then making a cup shouldn’t be too difficult. All you need is some hot water and a sachet of your favorite coffee brand. You can guess the rest...

If you are into something sweeter, you'll have to do a little bit of mixing and blending, but nothing too complicated. A short trip to YouTube should help you make a cup of Mushroom Mocha or anything else that catches your fancy.

Since Mushroom coffees aren't as widespread as some other drinks, there are only a handful of reliable brands that you can really trust. It's not that there aren’t other great brands out there, it's just that I wholly recommend them because I have not used them like I have these ones.

Four Sigmatic is the absolute best out there. They are also known for their mushroom hot chocolate mix and excellent customer service. I would recommend this brand to anyone who is looking for an existing alternative. It has one downside, however. It is quite pricey.

This one is a slightly cheaper alternative to the previous one. This is by no means inferior to Four Sigmatic, but in my opinion, it just doesn't taste as good. However, they do have quite the flavor bank, and their recipes are mostly tailored for weight loss.

Although it's not the tastiest alternative to a nearly perfect Four Sigmatic, it is a lot cheaper. Also, its perks have made it the obvious choice for anyone that is looking to curb the side effect of drinking coffee without altogether quitting it.

It contains just enough caffeine to keep you going and not to mention that it is packed with all sorts of antioxidants.

All in all, PureShrooms is a reliable second choice. It doesn't matter whether you're looking for less caffeine or more nutrients. It is a practical alternative to the real thing, and it is a beverage in its own right.

Related article: What Is Grain Coffee? - Nutritious Roasted Alternative To a Regular Cup Of Joe.