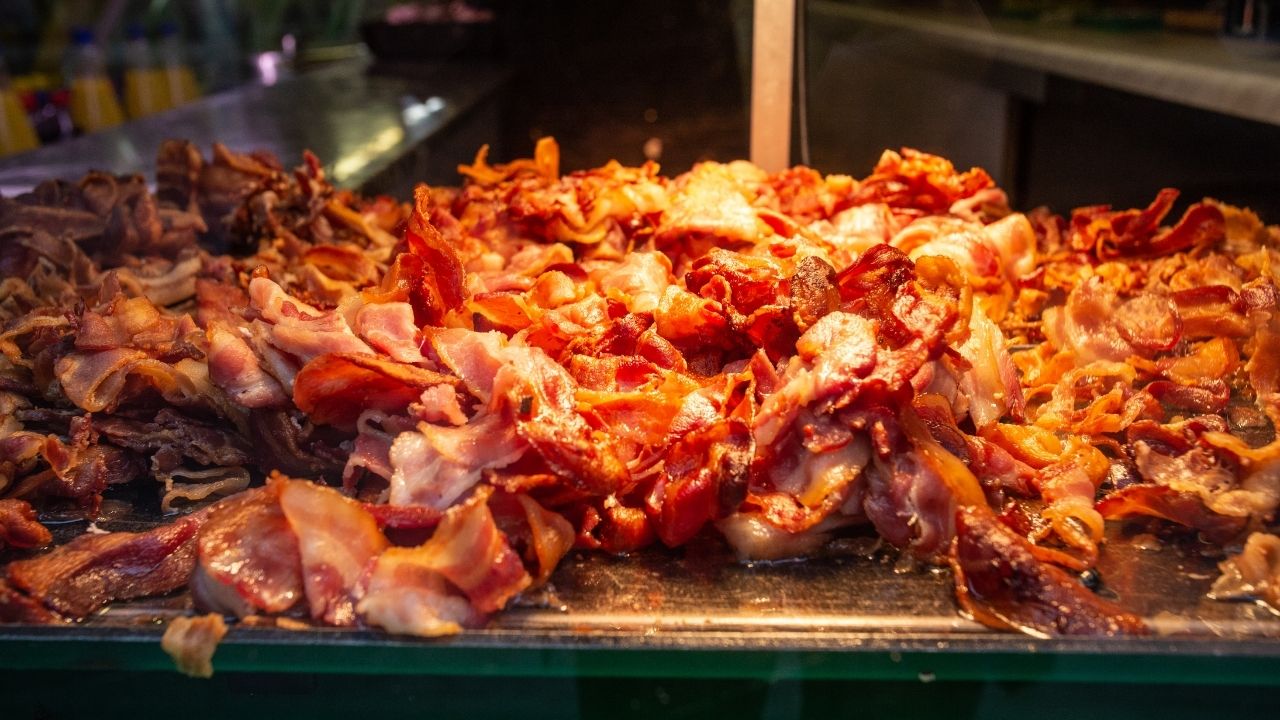 Cooking bacon in a pan is fine if you are only cooking for yourself, but what happens when you have a house full of people that are all craving some salty, smoky, crispy, yet succulent rashers? If you’re preparing for a party or gathering and need to know how to cook large quantities of bacon, stick around because I have some effective cooking methods for you.

In this article, I am going to share the top 3 ways to make bacon for a crowd in the oven.

Method 1: Cook Bacon On A Baking Sheet In The Oven

The first, and arguably the best, way to cook bacon for a large crowd is in the owner, directly on a baking sheet. This method produces the best-tasting, crispiest, and most evenly cooked bacon out of all the methods, and it is extremely easy to set up. This is also how most hotel restaurants cook bacon for breakfast.

When cooking large quantities of bacon in the oven, getting the temperature right is important. 425°F (218°C) preheated oven works well for both thick-cut and regular bacon.

This step is recommended to ensure easy cleanup of your baking sheet after the bacon is done cooking. It does not affect how the bacon cooks, so this step is optional, so don’t worry if you don’t have any foil on hand. Parchment paper will also work. However, you must use a rimmed baking sheet to avoid getting bacon grease in the bottom of your oven.

3. Lay The Pieces Of Bacon On The Baking Sheet

As you lay the rashers out over your baking sheet, make sure no pieces of bacon are overlapping as this will cause it to cook unevenly. However, since bacon shrinks once cooked, you can put the rashers as close together as possible to use up all the space available on your baking sheet.

4. Cook In The Oven For Around 20 Minutes

Use 20 minutes as a baseline as this should give you quite a perfect level of crispiness. However, you should continuously check on your rashers to ensure that it doesn’t burn, and you should pull the baking sheet out of the oven when it reaches your desired amount of crispiness.

Also, if your oven doesn’t cook evenly, you may want to rotate the baking sheet halfway through, to make sure all the rashers will bake evenly.

5. Drain The Bacon On A Paper Towel

Something to keep in mind is that when you cook bacon on a rimmed sheet pan, it cooks in its own fat. This increases the flavor of the bacon, but it also means you may want to get rid of some extra fat after cooking.

This is very simple; lay the freshly cooked bacon onto paper kitchen towels to absorb the excess fat. You can also use some paper towels to pat the stripes down on the top.

This is probably the healthiest and cleanest way to cook large quantities of crispy bacon in the oven. This cooking method uses a folded-up, one-inch stripe, accordion-like piece of aluminum foil as I will show you in the video above. This method is best for people who prefer less greasy bacon as the bacon doesn’t cook in its own fat.

Next, just lay out your bacon strips on your tin foil baking rack and cook in the oven at 425°F (218°C) for about 20-25 minutes or until the bacon is as crisp as you like.

Method 3: Cook Bacon In The Oven With Parchment Paper Stack

The third and final way to cook bacon may seem a bit unorthodox but it does work great when cooking for a crowd. It works by cooking the slices of bacon between sheets of parchment paper and sheet pans layered on top of each other. That way, the rashers come out perfectly flat, which is perfect for sandwiches.

Then, place the second sheet pan on top of the parchment paper covered bacon, ensuring that the rashers stay flat when cooking. You can stack several layers of baking trays on top of each other. That way you can cook a lot of bacon fast and at the same time only if have enough baking trays to do so. Just add extra 4-6 minutes for each additional layer you add to the oven.

Follow the same temperature as method one above, 425°F (218°C), but cook for about 25-35 minutes depending on whether you use thin-cut or thick-cut bacon.

Because the bacon is covered with a parchment paper and another baking sheet you may think that it won’t cook properly and be nice and crispy but it will, just needs a few minutes of extra cooking time.

Once cooked, to absorb the unwanted fat, place the cooked bacon onto paper towels.

Read Also: 4 Ways To Cook Eggs And Bacon In The Same Pan (From Sunny Side Up To Scrambled).

How To Cook Bacon For A Crowd In Advance?

Cooking during a party is never fun. You can save yourself the hassle by cooking bacon in advance and heating it up during your gathering.

The best way to do this is to cook your bacon until it is slightly underdone and put it in a Ziploc bag in the refrigerator. Then, when you want to serve the bacon, heat it in the microwave on a paper towel.

You can also reheat and keep the bacon warm in a crockpot on low so that it stays warm throughout your party. Or you can also use a chafing dish (metal cooking or serving pan on a stand) and serve the bacon buffet-style if you are cooking for a large crowd of people.

What Temp To Cook Bacon In The Oven?

The recommended oven temperature for cooking bacon is 425°F (218°C). At this temperature, the bacon will cook evenly and produce crispy results. However, some ovens may run hot or cold, so it is best to start with a lower temperature and then increase it if needed.

How Much Bacon Do You Need Per Person?

There is no definitive answer to this question. It depends on the person’s individual preferences and dietary restrictions, as well as the dish that the bacon is being used in. For example, if someone is making a BLT sandwich, they will need less bacon than if they were serving it with scrambled eggs. In general, though, it is recommended to use about 2-3 strips of bacon per person.

How To Cook Bacon In The Oven Without Splattering?

The best way to cook bacon without splattering is to bake it in the oven covered with a loose sheet of aluminum foil or parchment paper. The bacon will cook more evenly this way, and there will be less splattering.

The medium-cut bacon will be cooked through in about 22 to 25 minutes at 400 degrees Fahrenheit. At this temperature, the bacon will have rendered its fat, and the meat will be crispy on the outside and still have a little bit of chew to it on the inside.

Cooking large quantities of bacon is not difficult. With the oven and a baking tray, you can have perfectly cooked crispy bacon for a large crowd of people in no time.